Loulé offer its visitors an enormous amount of places that deserve to be visited. Wander through the Municipal Market, with its classic Moorish-style architecture, and enjoy all the aromas in the air. On Saturdays, lose yourself in the alleys adjacent to the main market, where you will find the weekly market of Loulé.

Of the several places to visit, it is important to mention the three towers, the ruins of the ancient wall of the Moorish castle rebuilt in the 18th century, and the doors of Heaven, once one of the key entrances to the old part of the city within the Moorish castle.

You can also visit the Mother Church of São Clemente, built during the 13th century, over the foundations of a Muslim Mosque. The portal is still original; however the remaining parts of the church were reconstructed several times over the centuries.

Then, head to Alte, whose streets deserve a walk that will present you with the fairy chimneys and the parapets with picturesque and traditional architectural details. Visit the Casa da Memória and the Oficina da Cerâmica (pottery workshop) and get to know a little more about Alte through the ceramics and tiles on display.

Head to Salir, a land once inhabited by the Celts and that the Arabs have developed in the seventh century. Visit the ruins of the castle built to defend Salir. Next to the castle a museum space was built in order to preserve and disseminate the archeological studies that have been developed on the site.

Finally, visit Querença and the simple houses with colored bars and traditional lace chimney, where you will definitely breathe some peace of mind. High on the hill is the Mother Church dated from the 16th century, boasting a beautiful Manueline style portal of the 16th century. It is located in the area facing the Church and from where one can see the wayside cross foundation on a rock.

Did you like your stay ?
Leave us your review 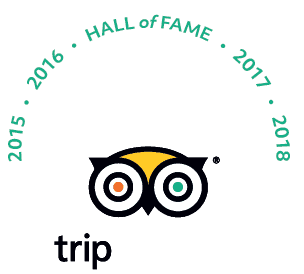